My Character and I

In October 2018, Michael Crowley asked me to meet him for a coffee and a chat in Hebden Bridge. He said he had written a play and there was a character, a Royalist Squire, who was quite menacing, sarcastic, manipulative, supercilious and entitled. Michael said: “I thought of you for the part”! This offer of an acting role, my first, was not the most charming invitation I have ever received, but I instinctively said “Yes”. I have always been an individualist, introspective, an outsider (even, at times, a loner), someone who has voiced doubts about what ‘community’ actually means, but now I find myself part of a ‘community play’, working with others – strangers, locals, actors – to bring to the stage a state of the nation play. The Battle of Heponstsall is about the whole country in the 17th century, and about today. It is the work of a number of individuals working together as part of a greater whole. I am enjoying it: the part, the play, the community. 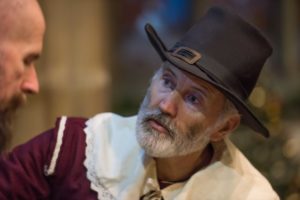