The Challenge of Becoming Someone Else

What does the advice from a GP, ex-UK Special Forces chaps, and a strong belief in pagan practices have in common? All have drummed their message into my head: if I want things in my life to change, then I need to change. Easier said than done for someone with PTSD, complex PTSD, and numerous medical issues. But despite my lone wolf melancholia and intense anxiety, I took the plunge and attended Michael Crowley’s public meeting for individuals interested in learning more about his play – The Battle of Heptonstall.

What a revelation. From that first meeting, Michael fired my imagination with his vision of what this play could achieve, (not in terms of his own career), but how it could benefit the village, engender an interest in local history, bring like-minded people together to produce something really worthwhile and worth seeing and, most importantly from my point of view, to close the door on my self-imposed hermit status and try and prise open those shutters on my personality which had so long been in lock-down.

Over recent months I’ve despaired over my ability to learn my lines, perform as a credible character, and stand/sit for long periods of time in freezing conditions (fibromyalgia takes no prisoners), but eventually I did learn the lines, and a hot water bottle, combined with multiple layers has ensured my colleagues haven’t had to sweep my frozen remains into a corner. I chatted and shared ideas with people I didn’t know; became engrossed in the process of putting together a production; made friends; brought old skills out for a dusting, while adding new skills to the mix. To say that being involved with this play has made a monumental difference to my life and recurrent depression is British understatement at its best. I’ve always loved play acting but was wary of ridicule and of letting myself or others down. While I may not be the next Elizabeth Taylor, my fears have been groundless, and I love the challenge of becoming someone else – not only do I play a man, I play a Royalist – both concepts rather alien to my nature. The hope of the Brutish Multitude is that we can produce annual plays which feature local people and local events, while illustrating our rich and varied history. A year ago, I’d have said good luck with that. Now my feeling is bring it on; I’m up for anything, and between us, we can pull it off. 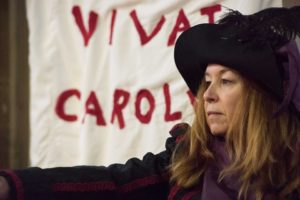