Posted on 2 December, 2018 by Michael Crowley

There are only two characters in the play based on real people who experienced the English Civil war first hand: the Parliamentarian leader, Colonel Robert Bradshaw and the Royalist leader, Sir Francis Mackworth.

In September 1642 Robert Bradshaw led the successful rout of Royalists under Lord Strange from the centre of Manchester. This was thought to be the first battle of what was to be called the first Civil War. The weather was atrocious and Strange finally lifted the siege, still in the rain, on 1 October. ‘You came with fire, but God gave us water’, the Parliamentarians wrote. Soon after, the whole of Lancashire became a Roundhead stronghold but only just! In October 1643, Bradshaw marched across the moors from Rochdale to garrison the village of Heptonstall and on November 23 the Parliamentarians gained a successful victory over the approaching Royalists led by Sir Francis Mackworth. This was not the first time these two commanders had fought: in October 1643 Bradshaw successfully routed Hollins House in Warley, under occupation by Royalist soldiers. But Bradshaw died in December 1643 from injuries sustained at the Battle of Heptonstall whilst Mackworth retained Royalist occupation of Halifax until January 1644. It is not know when he died.

Michael Crowley made the decision to cast both leaders as female: I play Bradshaw and Jan Radovic plays Mackworth. This has proved very interesting. Gender-swapping on stage is not new. Shakespeare is well known for casting men as women and some directors/companies choose to continue this tradition, but recent productions suggest a new wave of women playing such male characters as Hamlet (Maxine Peake), King Lear (Glenda Jackson) and Malvolio (Tamsin Grieg). See the following articles here, and here, for more details.

Together, Jan and I also represent another of drama’s great themes, that of pairing characters in order to focus the audience’s embrace of social-historical ideas via characters’ thoughts and feelings. Whilst it is true that both Bradshaw and Mackworth are keen to give voice to strongly opposing political ideologies, they are also contrasted with all the other characters, apart from The Commoners. We are the functional trumpeteers of the Civil War, spouting our rather black and white ideas. We are not rounded characters like the Cockcrofts or spinners. And yet, Michael allows Bradshaw to get down from his podium to expand as a character: his interrogation of John Cockcroft, for example, reveals a human side to the flatter 2D double-headed coin of Roundhead versus Royalist. The question remains however: what will the audience make of our gender swap? I can only emphasise how enjoyable it is to both learn the history and Michael’s dramatic interpretation of one of Heptonstall’s past heroes. 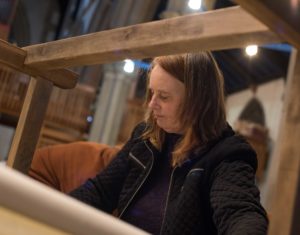